Hands on review on the Hentschel H1 Chronometer P 20. 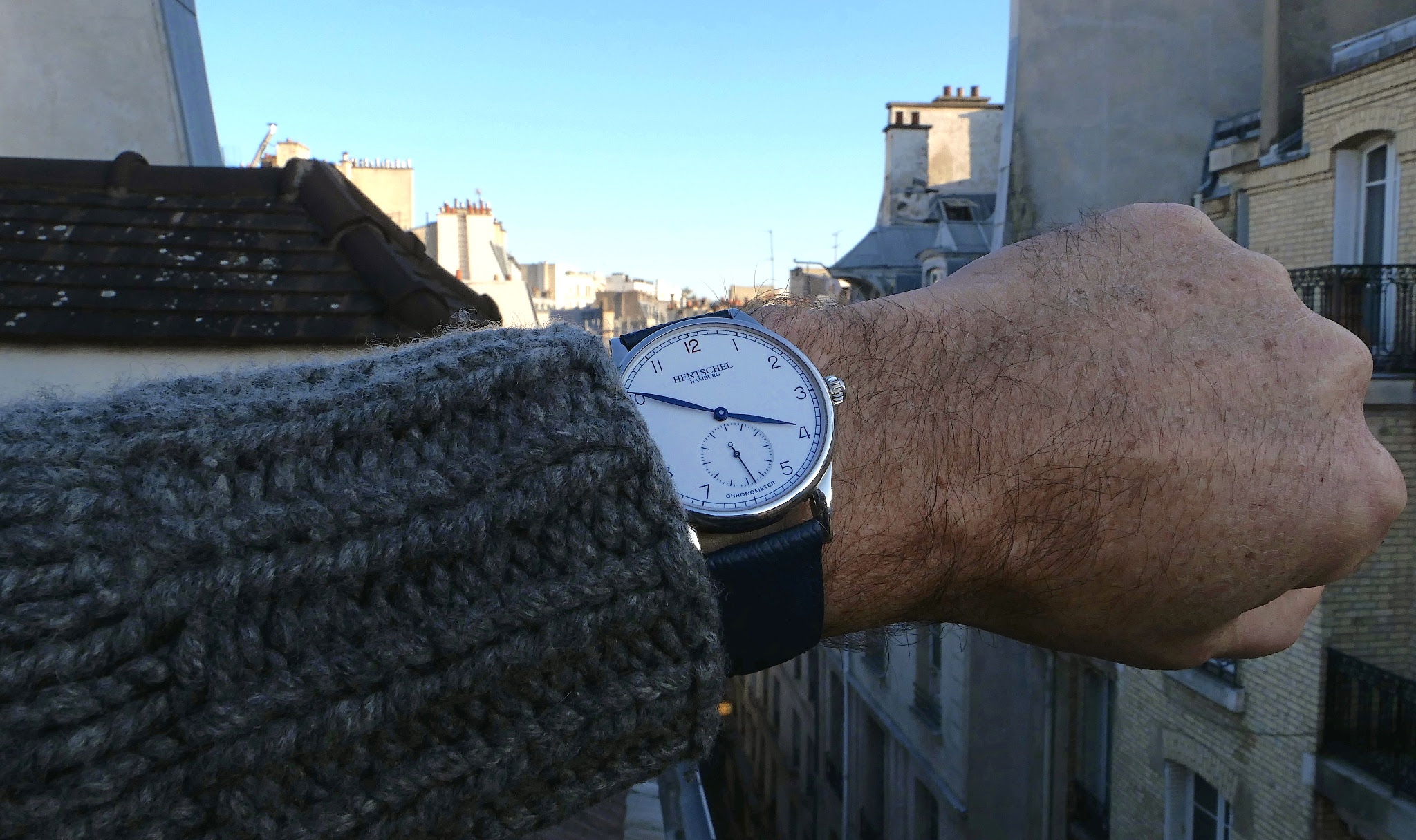 You attended the different stages of the elaboration of this watch through Mike's posts and mines, and with our dear Shorty Home's photos for more than one year and a half. The challenge was quite hard to achieve since we had to face some sanitary issues, the lockdowns, the slow rhythm of delivery companies ( with a first dial we lost in the mail! ) and so on, but we did it.
Now that it has been delivered to all those who wanted it, it is time to share some thoughts on the Hentschel H1 Chronometer P20 which was made to celebrate the 20th Anniversary of our favorite virtual home. 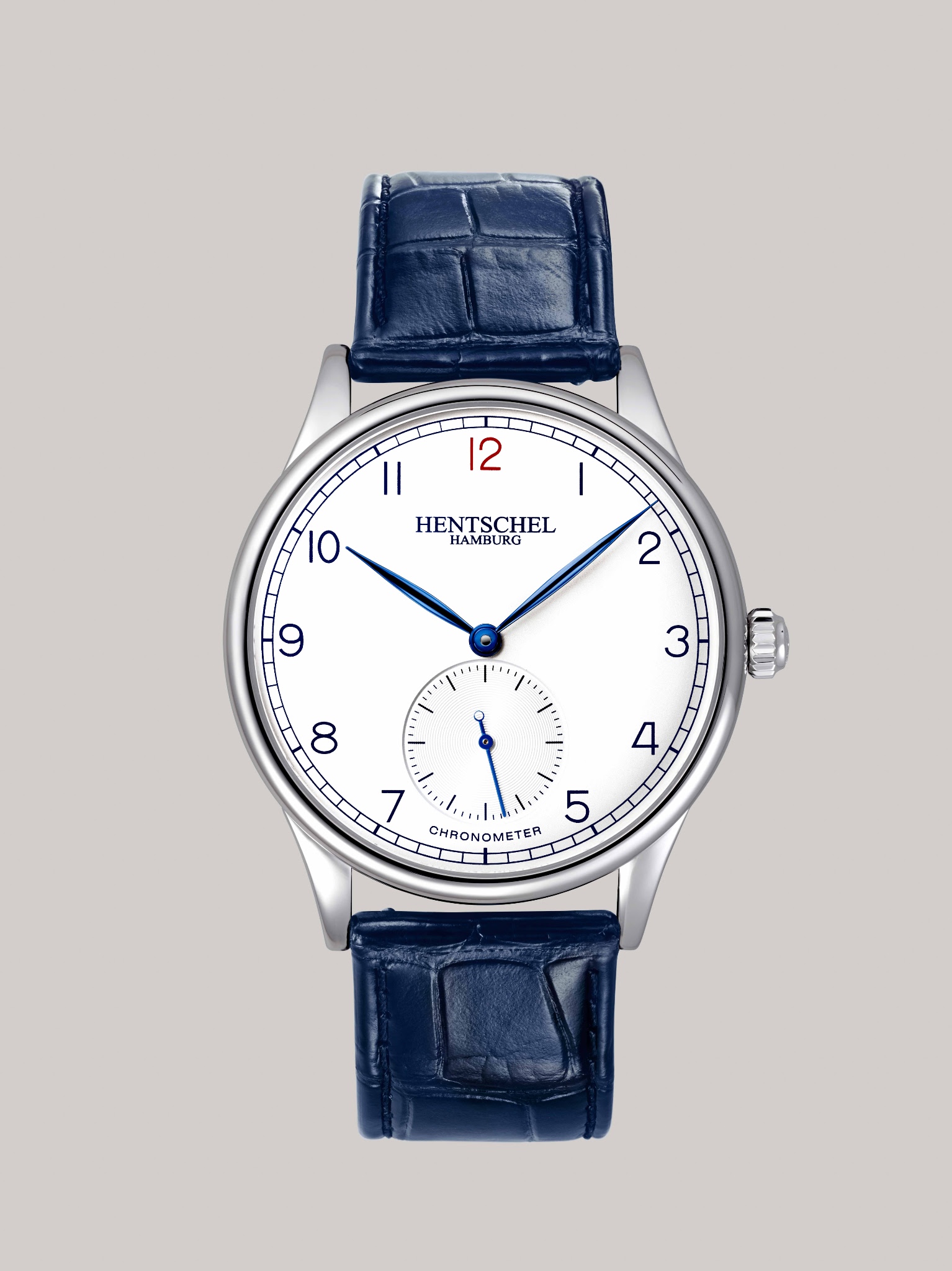 The main goal was to make something quite affordable but very appealing, special and quite exclusive within our Purist's standards. I must say that we are quite happy with the outcome. 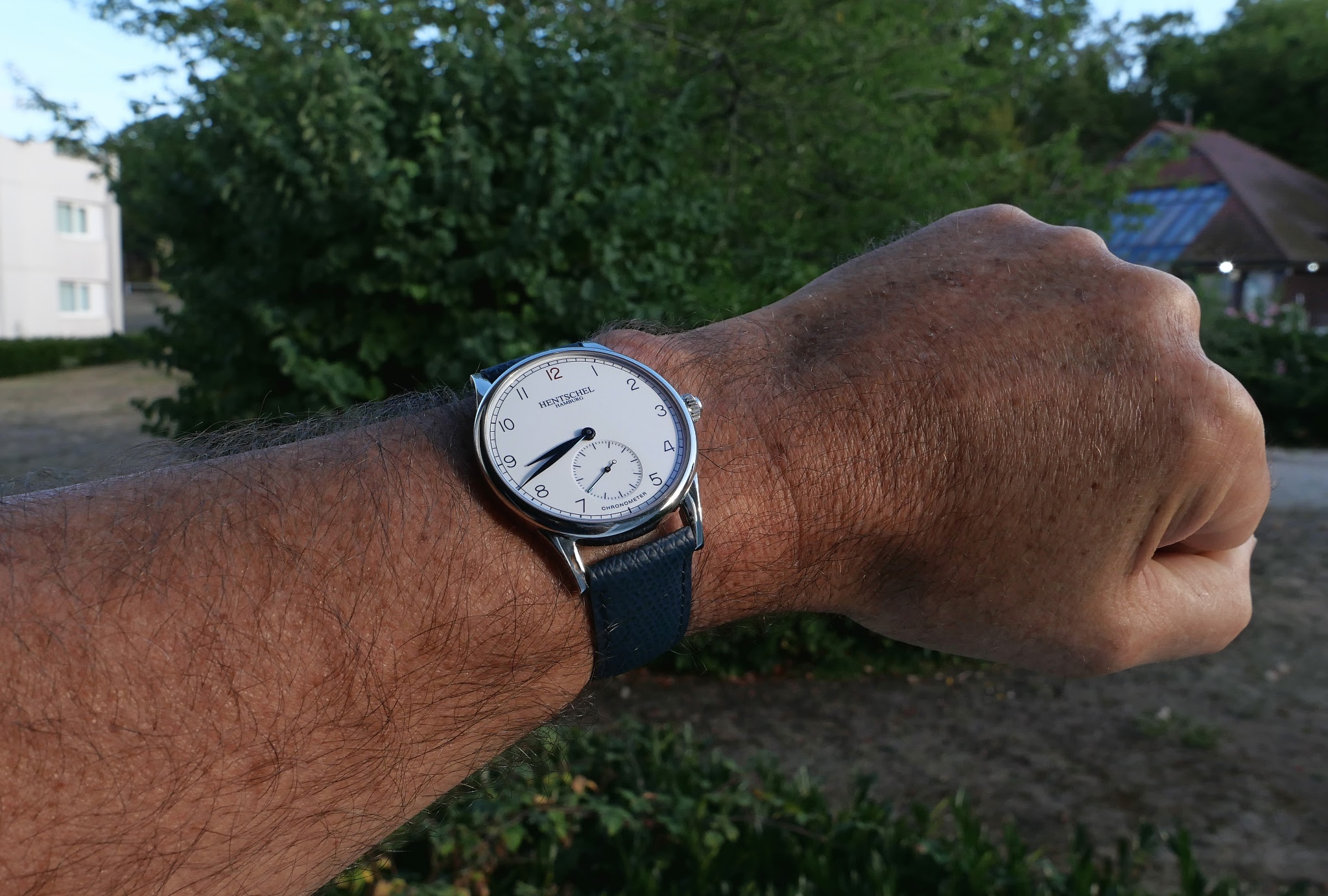 After some discussions with Mike, Bill and Hentschel, we selected the H1 case , which is the purest and the most classic from the brand. The H2 has some strong lugs which could not please the majority of us. I must say that we hesitated a lot between the H2 Sport, which is uber cool, and the more classic H1, though.
H2 Sport: 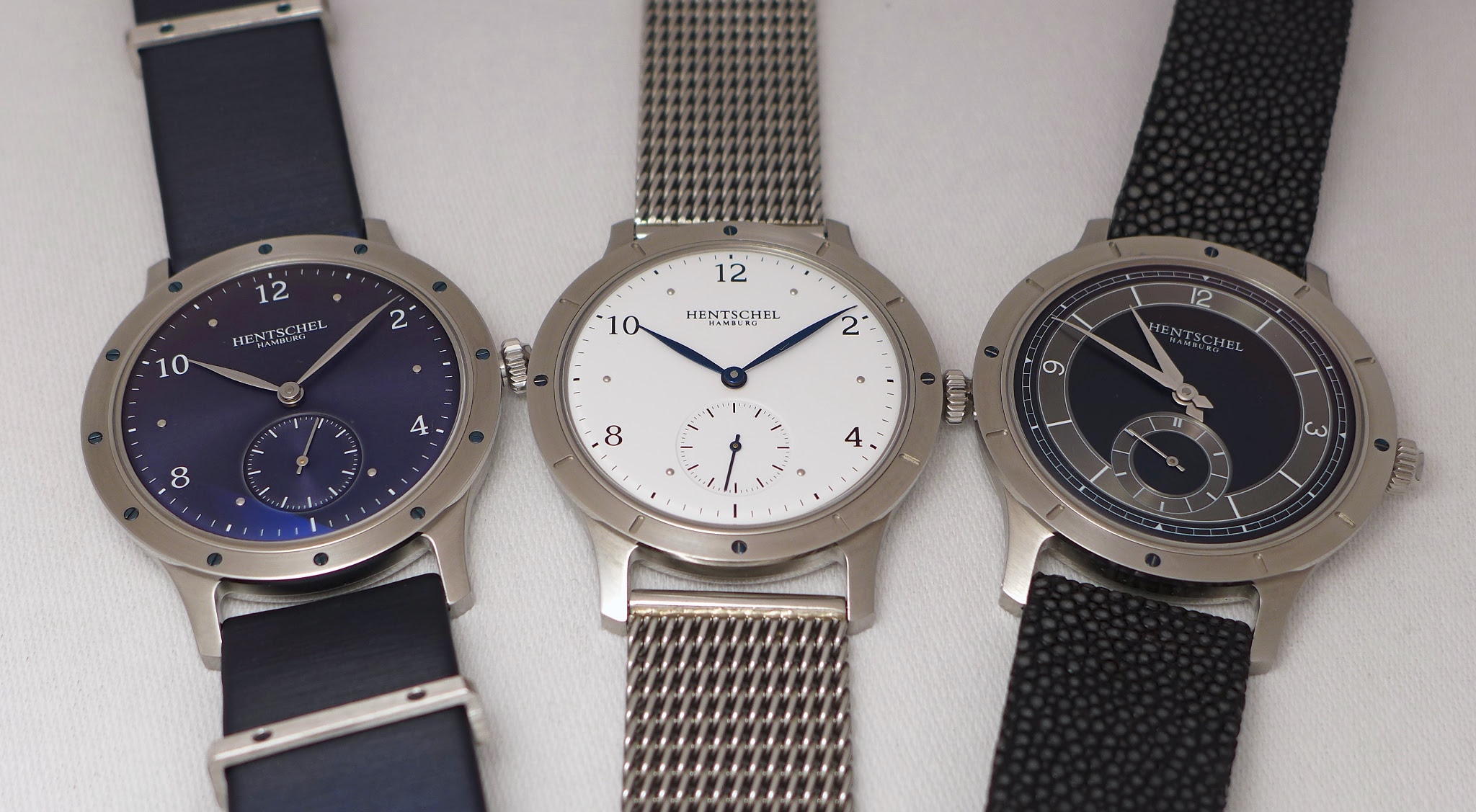 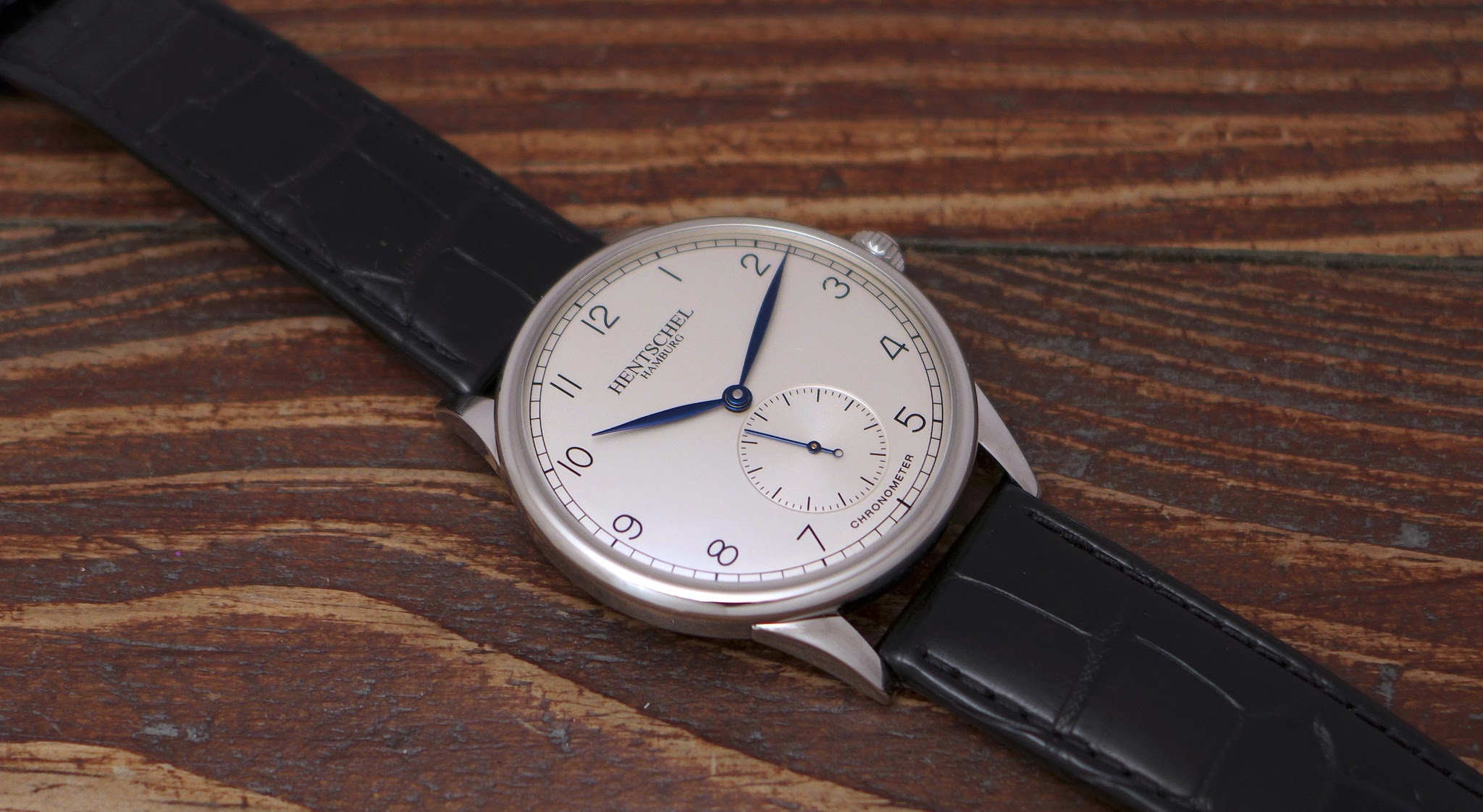 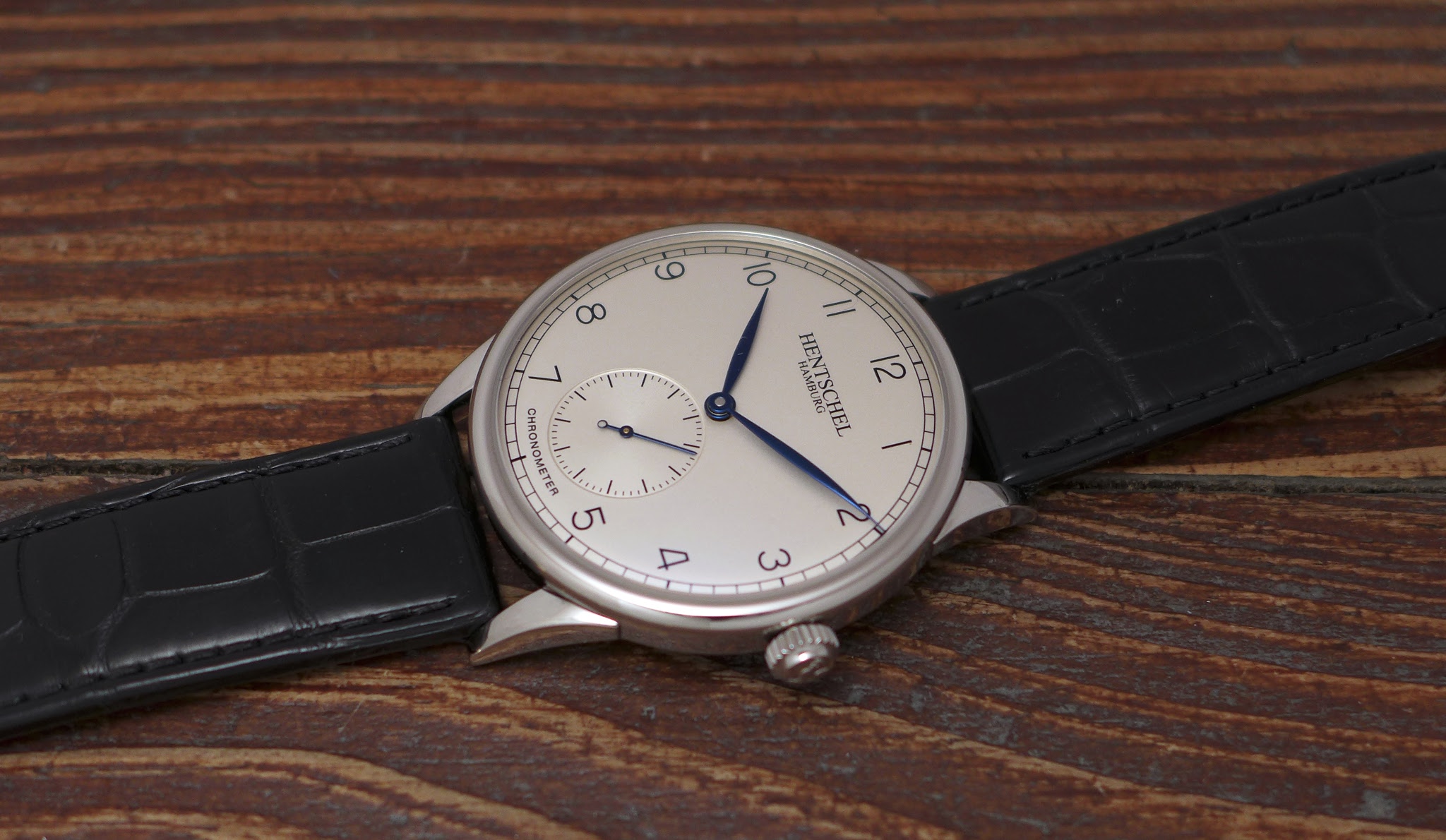 We had a first option with the case size: 37 or 39, 5 mm. It would have been me or Mike or Bill, we would have gone for the 37 mm case, but after " testing the waters ", the 39, 5 mm case received a warmer welcome. It doesn't lose elegance and class at all, I must say. We could even say it is very elegant. Keep in mind that the relative thinness of this watch is excellent, with only 8 mm! The lugs are superb, and the thin bezel contributes to focus on the beauty of the dial. 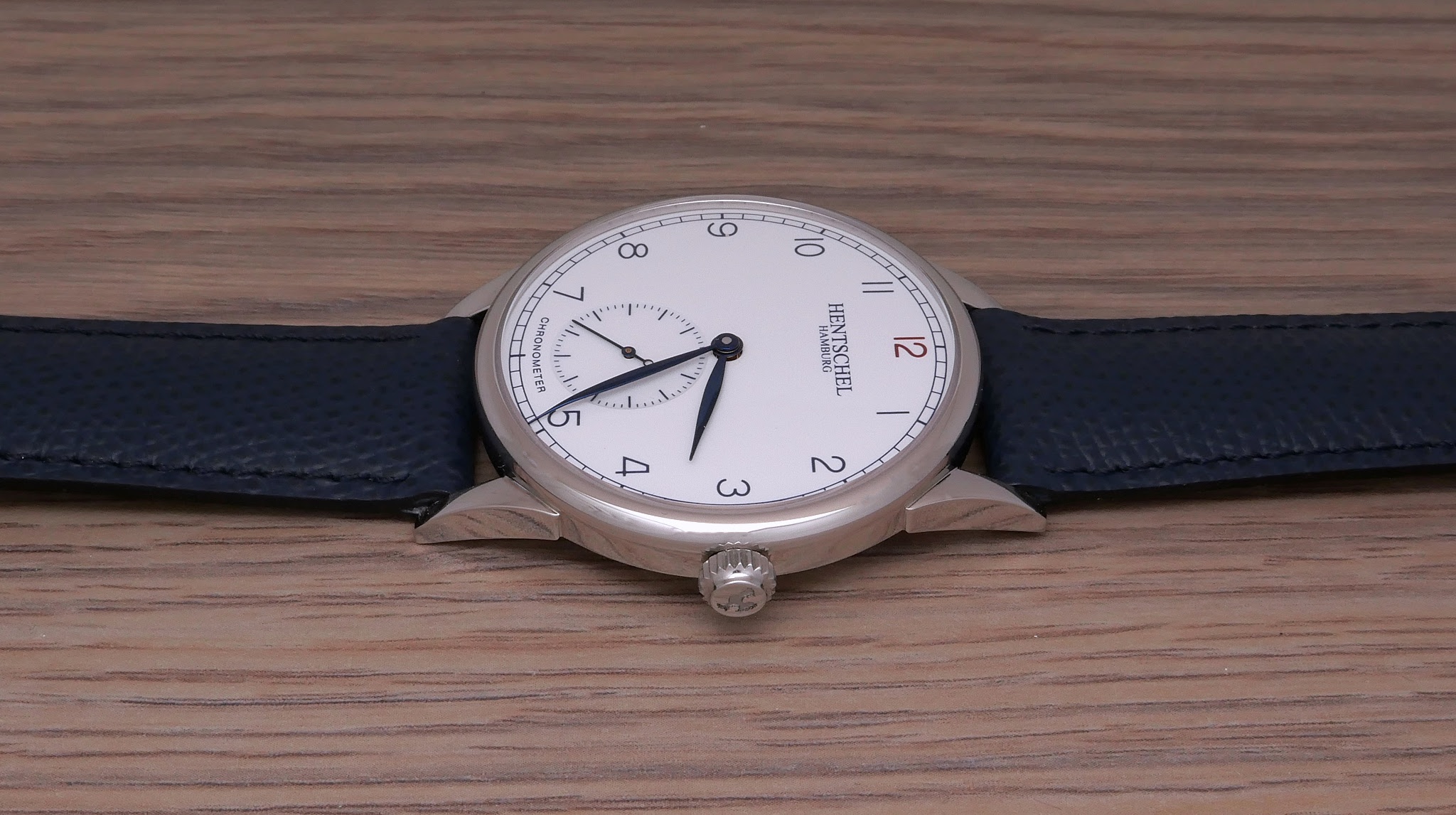 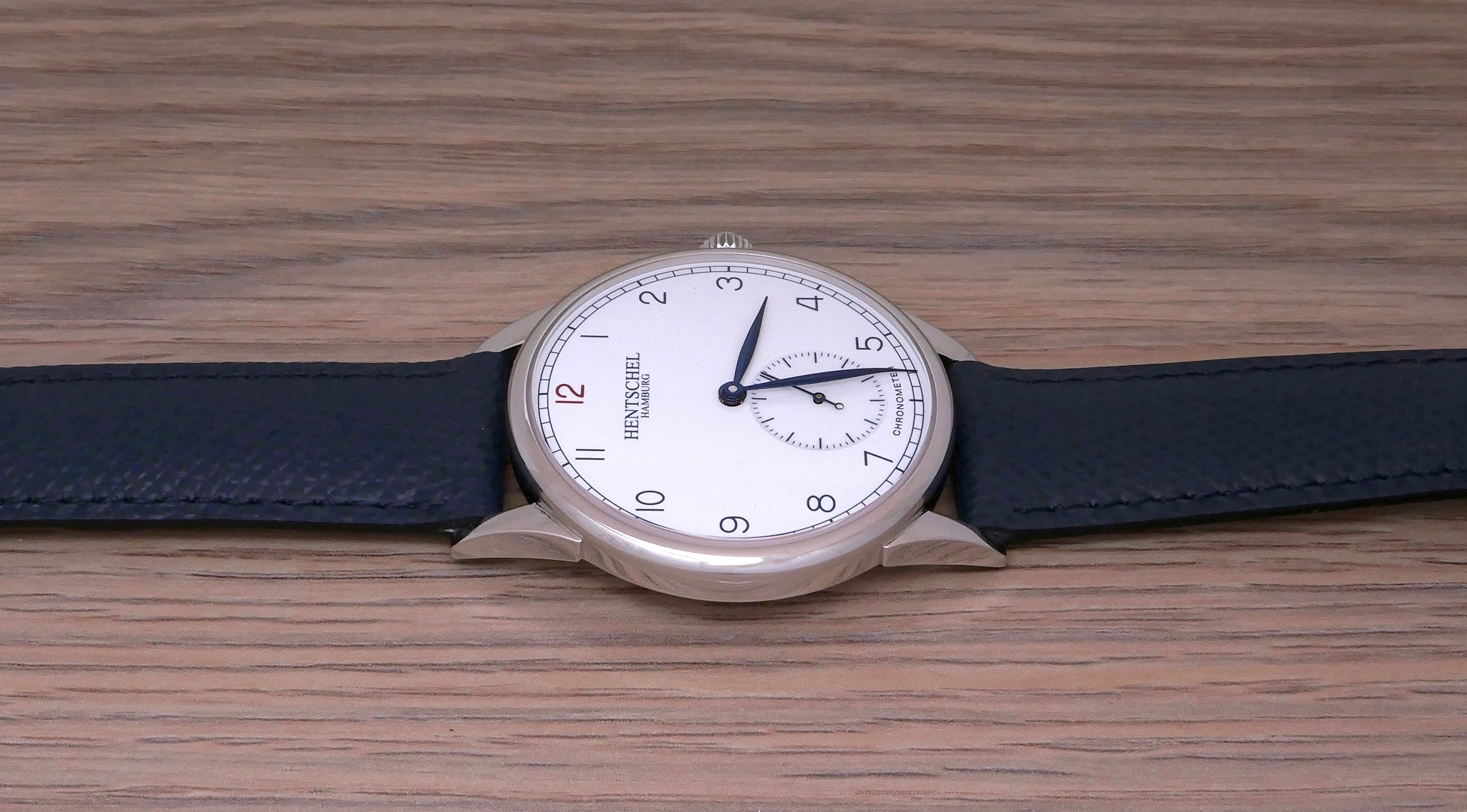 With a water resistance of 50 meters, it won't allow you to swim with it, but it is good enough for everydays situations.
In appearance, the case looks simple, but it is made of 20 parts.
The case back received a special treatment. Like the " normal " H1 it has  sapphire glass which shows the movement, but all around the ring, the mention of this anniversary piece is engraved. Something you wouldn't like to have on the dial, would you? And you also have the " 1 of 20 " information, to enhance the fact that only 20 pieces were made.
One word on the crown, which I find perfect: Not too big nor too small, and not too thick. Just nicely integrated to the case.
All the attention has been dedicated to the dial . 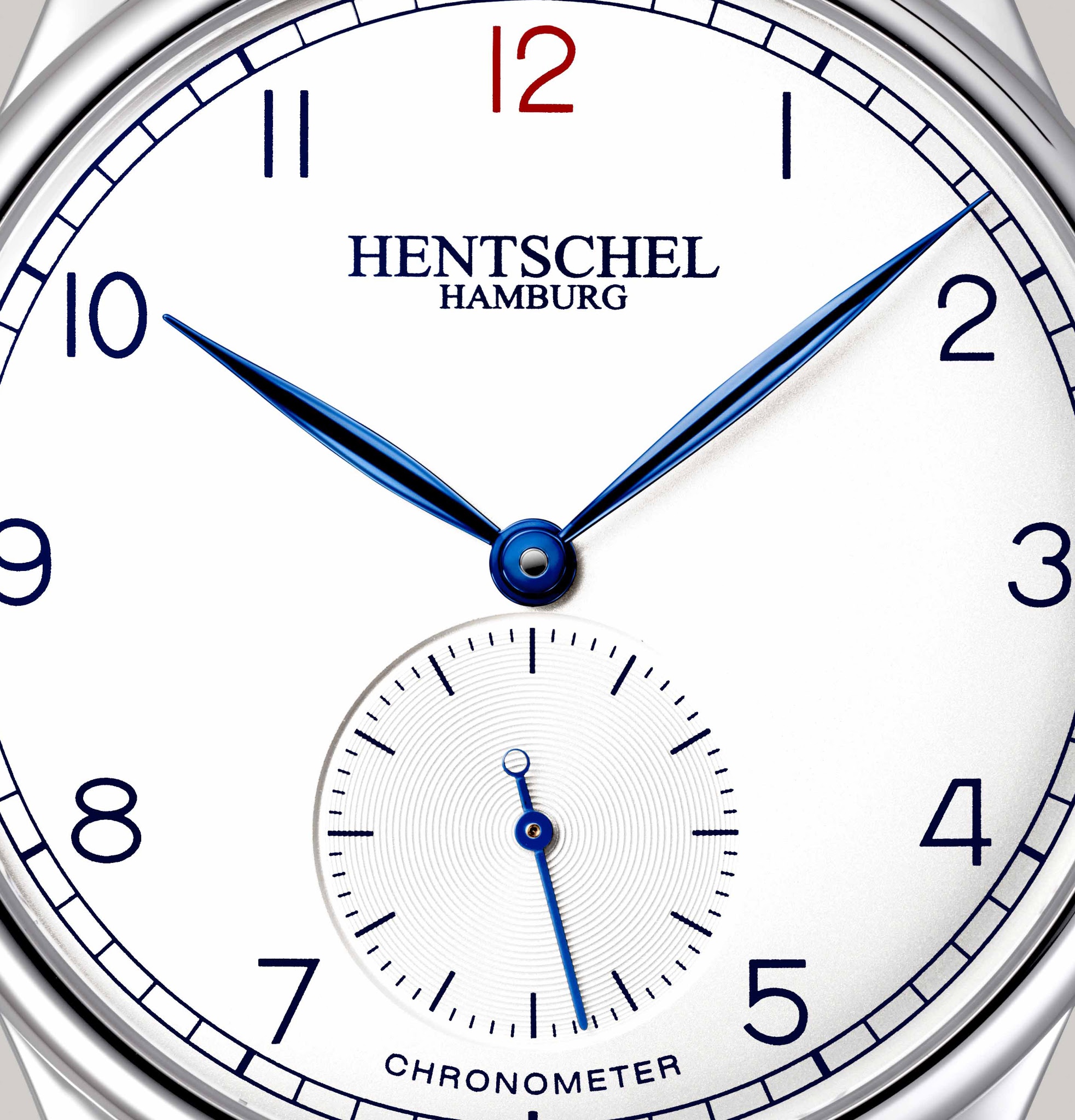 As the H1 is a Chronometer, we wanted an uncompromising legibility, simple, sober, but with a lot of charm.
Hence the idea of:
- A minimalistic wording, with the name, the headquarter of the brand, and the " Chronometer " mention which has the good taste to be discreet. 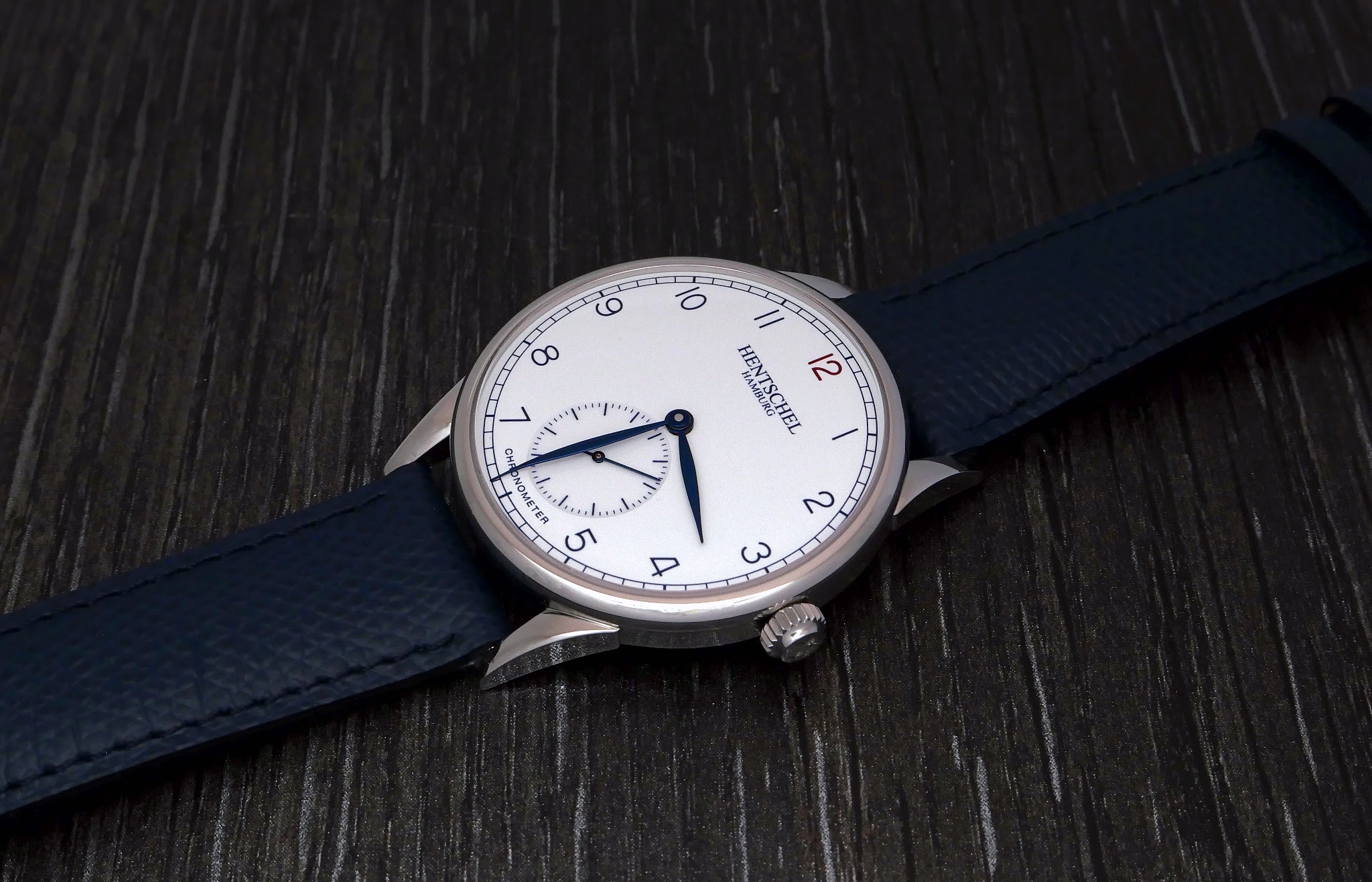 - Navy Blue writings, numerals minute and second tracks and hands. Navy Blue was the best color for us, a kind of reminder that the brand is linked to marine chronometers. A red 12, to give some life to the dial. Choosing the right hue of blue and red was not that easy. We had several tests, and we finally opted for the hues you can admire now on your own watches. 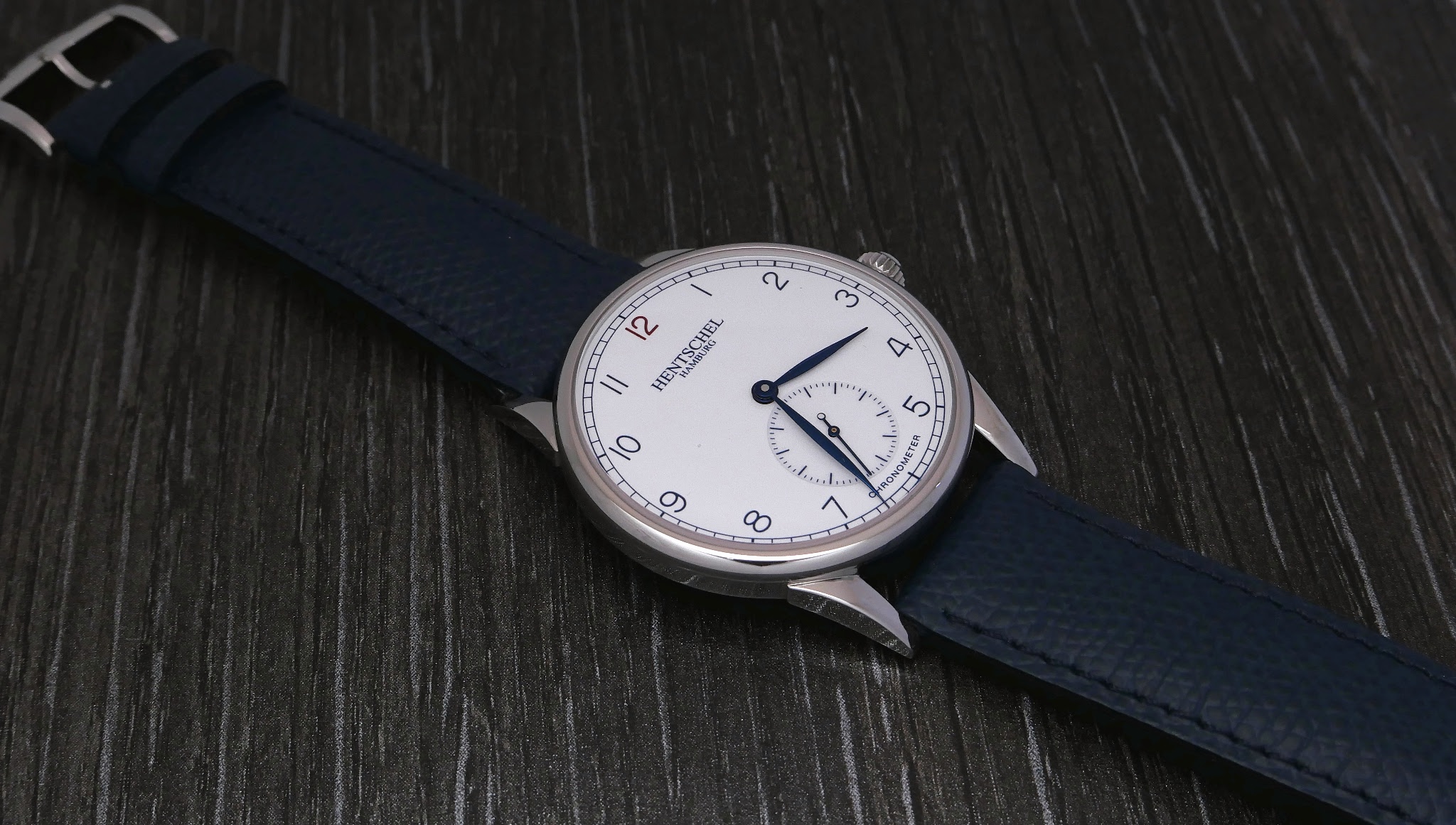 - Blued steel hands, slightly cambered, for aesthetic reasons, and for readability. THe hands are cambered because the dial is, too. The leaf shaped hands are just sublime, I must say. 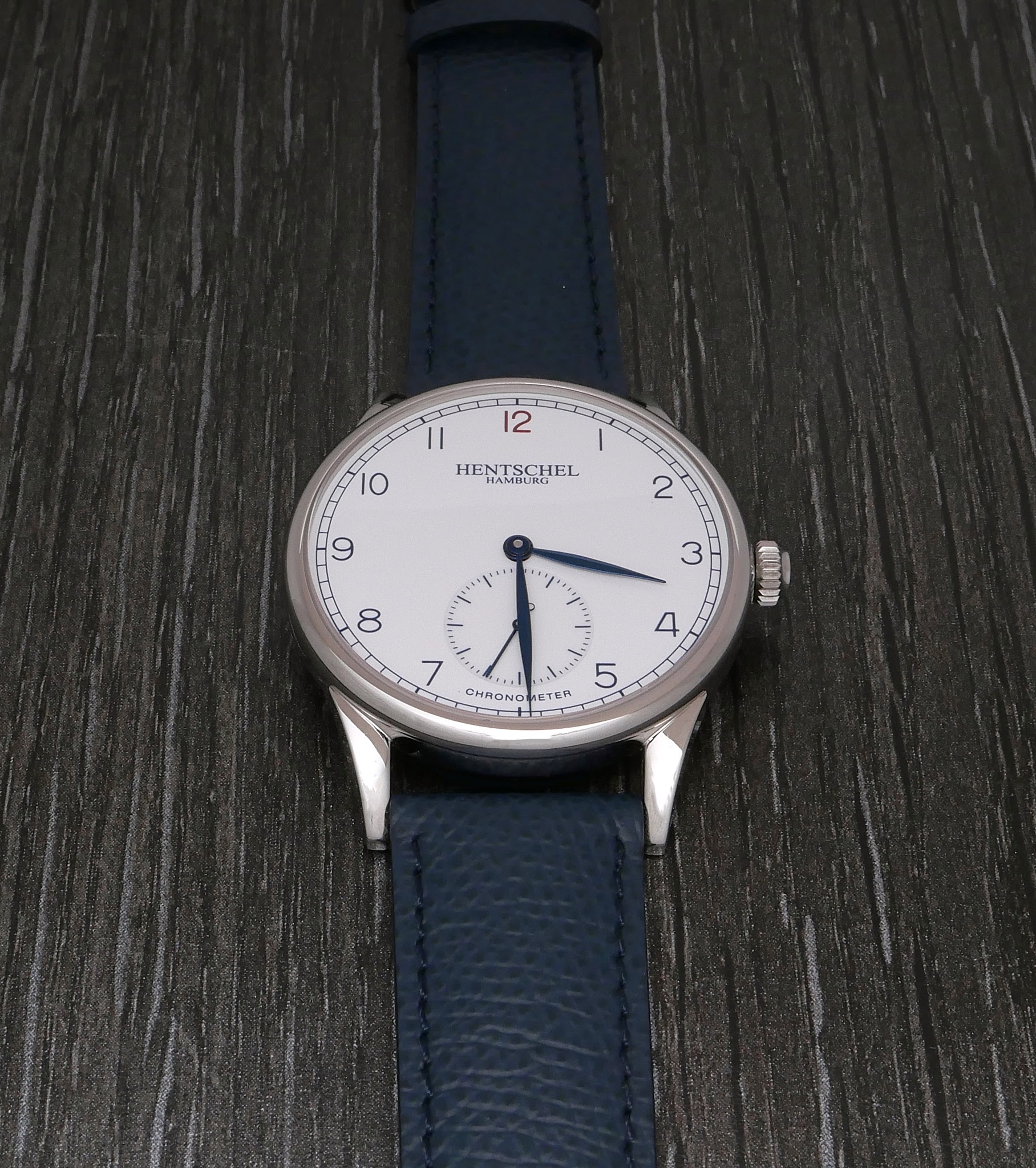 - And the most challenging part, the dial in itself. We wanted it to have a good depth, warmth, as silky or milky as an enameled one. Here again, we had several tests, and  we finally agreed on this one, which received not less than 6 layers of lacquer. The contrast with the blue writings hands and minute tracks and red 12 is truly eye catching... Faithful to the spirit and the aesthetics of old marine chronometers. 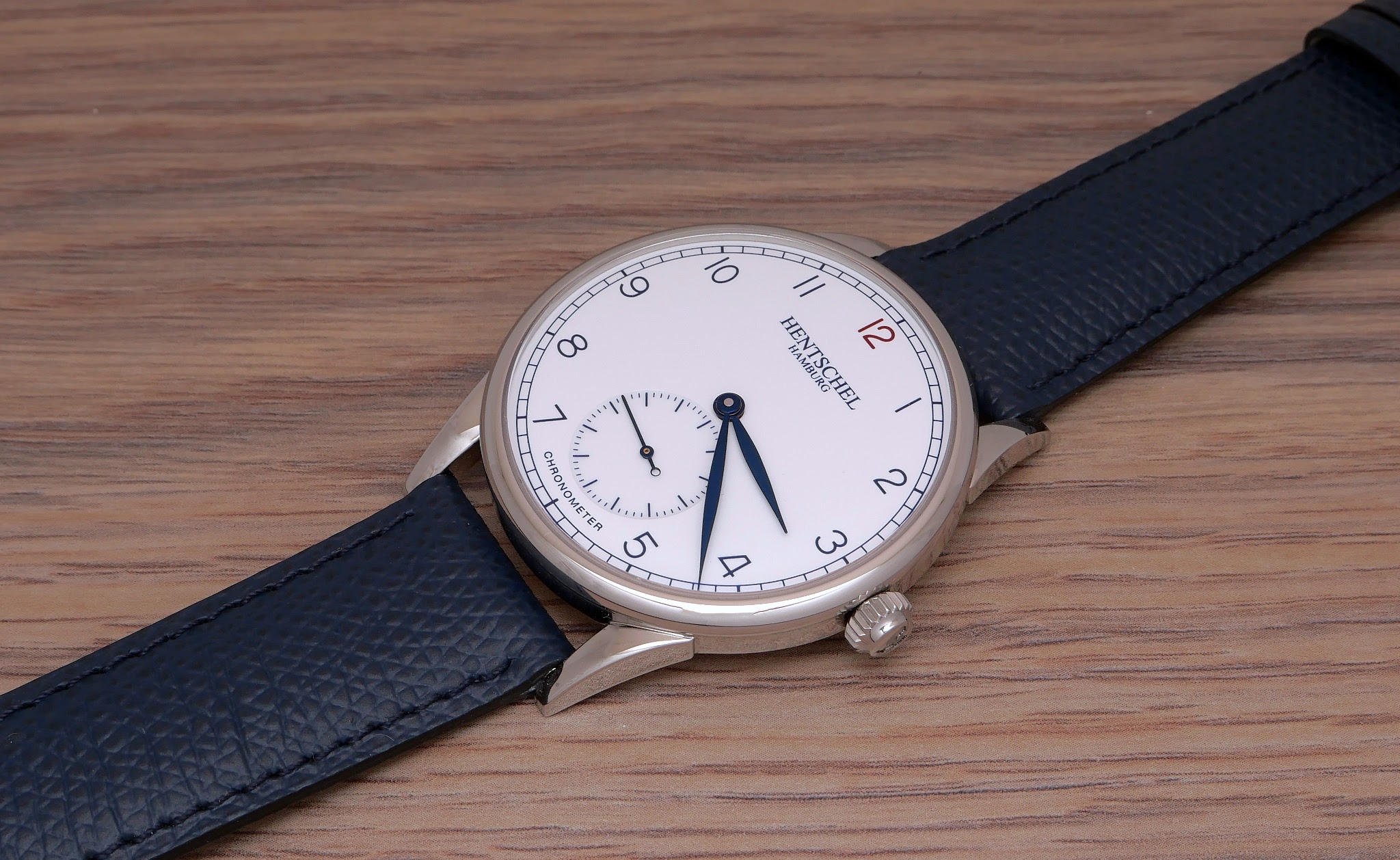 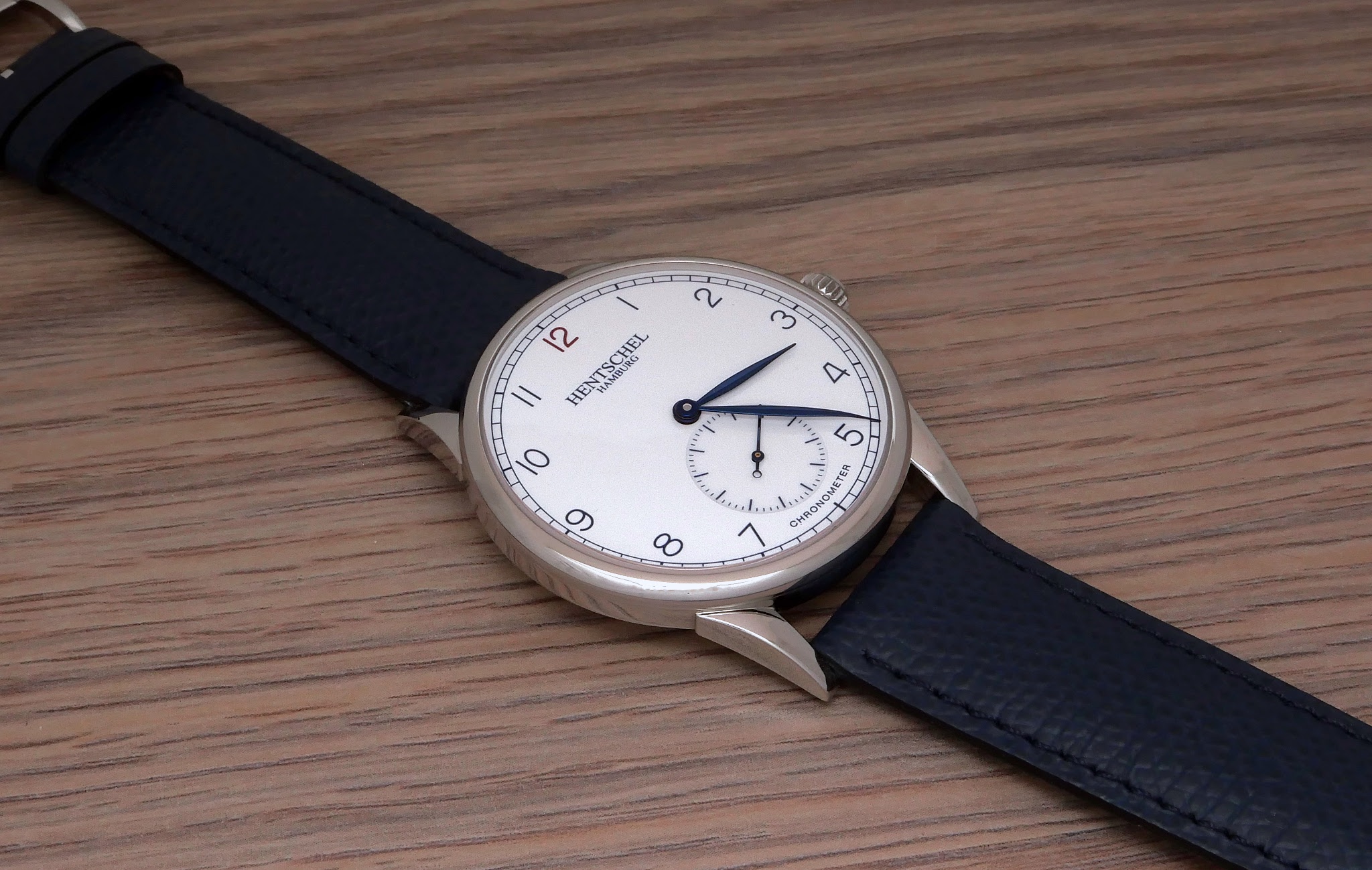 Above the dial, you have a sublime domed sapphire glass which has a double anti reflective and scratch resistant treatment.
The movement is another core point of the Hentschel P20.
I would even say better, the movement has been the first reason for our choice. Why? Think about it: How many manual winding modern chronometers do you know? Not that many... And those who are available are not at all in the same price range.
A manual winding movement is something we really like, here, as it is most often better decorated than an automatic movement. AND, cherry on the cake, it is a chronometer, which means a watch dedicated to accuracy. The form and the function... What more to ask for?
Did you know that the surfaces of the mainplate and bridges were white gold plated? I learnt that while reading the " making of " book Hentschel gave to each of the owners. Other than that, it is a typical german movement, with a nice level of decoration ( perlage, côtes de Genève, screwed-on  golden chatons ) and a delicious swan neck regulator. 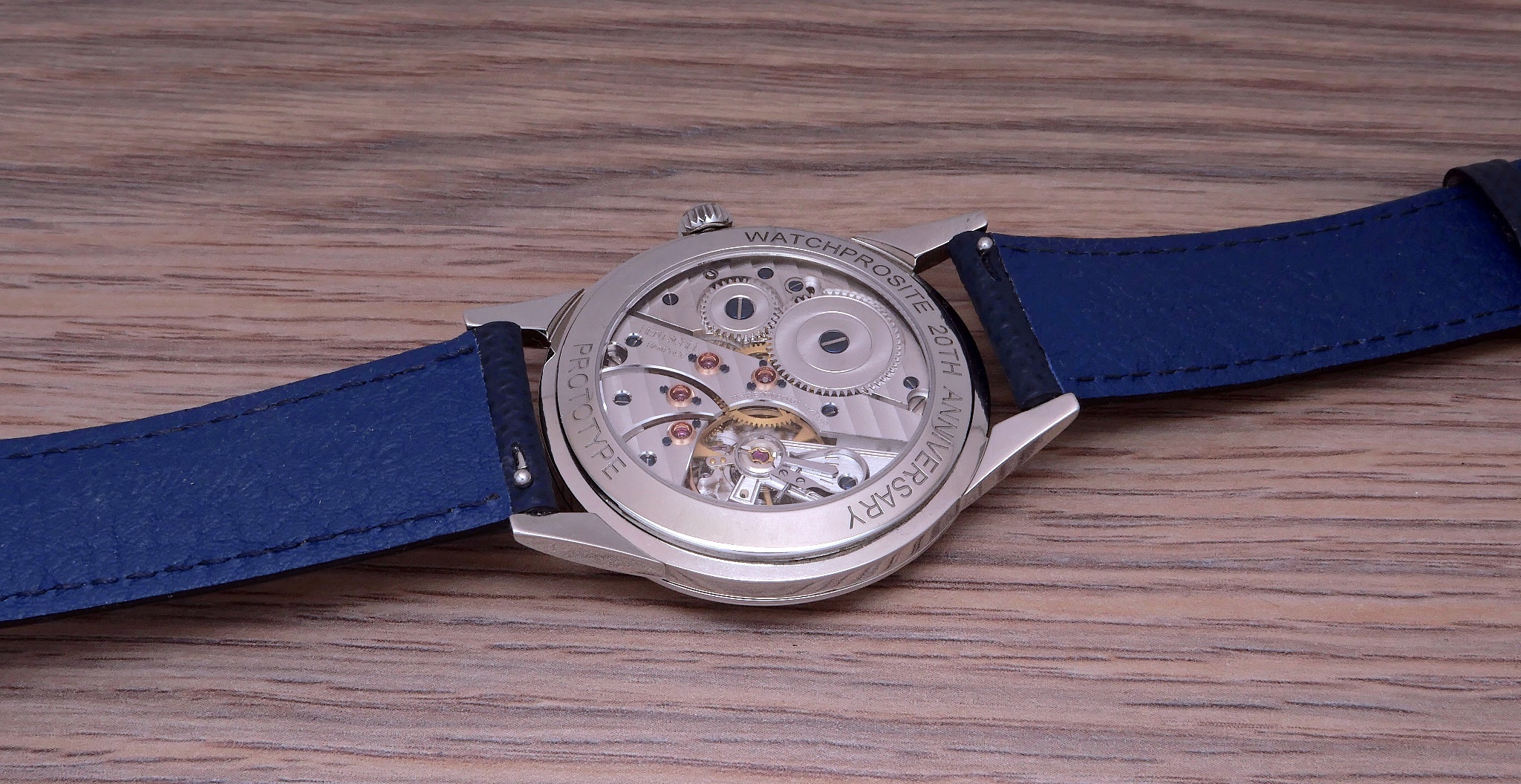 This movement, the Cal 1130 Premium, is made in-house. It offers a power reserve of 37 hours, adjusted to 6 positions according to the German Naval Institute, and tested for 1000 hours. The tolerance is -4 / +6 seconds per day. After a full month, mine is running 5 to 6 seconds fast. Which is good enough for me.
Personal thoughts:
These PuristS' Anniversary watches have a special taste for us. The Zenith P15 received a warm welcome. For our forum's 20th anniversary, we tried to go off the beaten paths, with a serious brand. Hentschel was a very good candidate, offering us a watch which corresponded to our wishes.
This " P20 " is a joy to own. It spent most of the month of August on my wrist. I like its presence, its class, and the idea behind the watch. I am totally smitten by the dial, its warmth and depth. 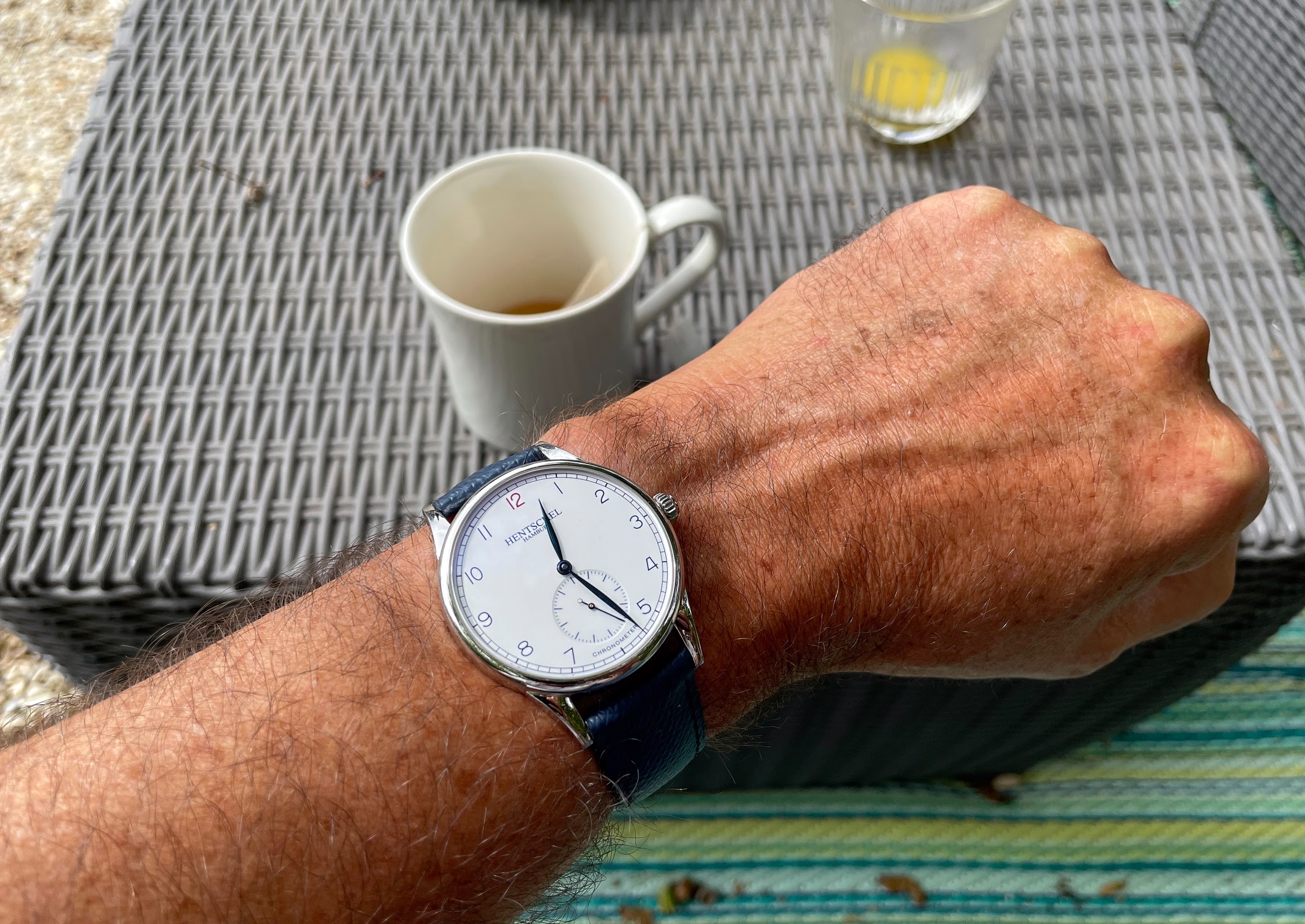 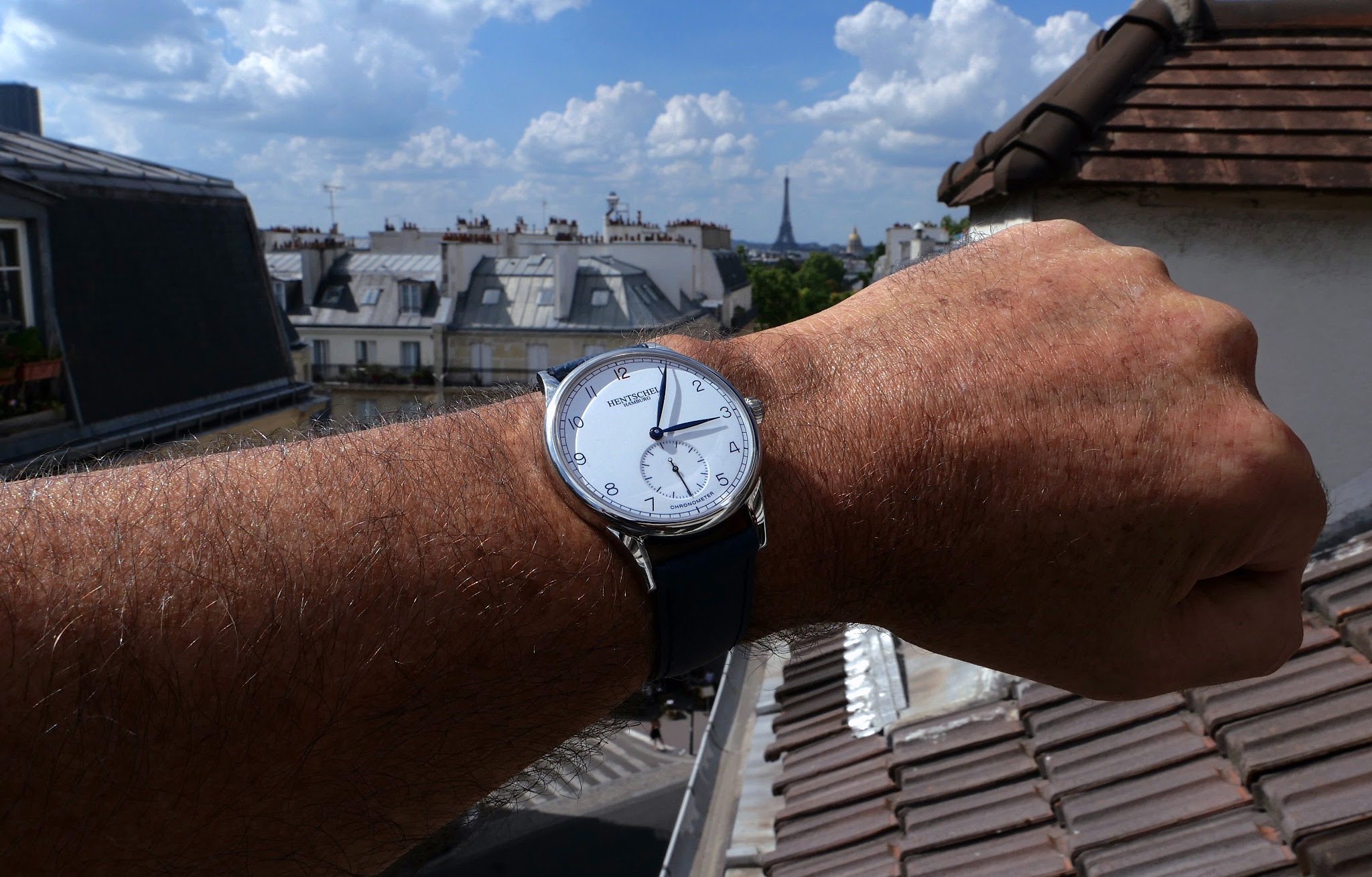 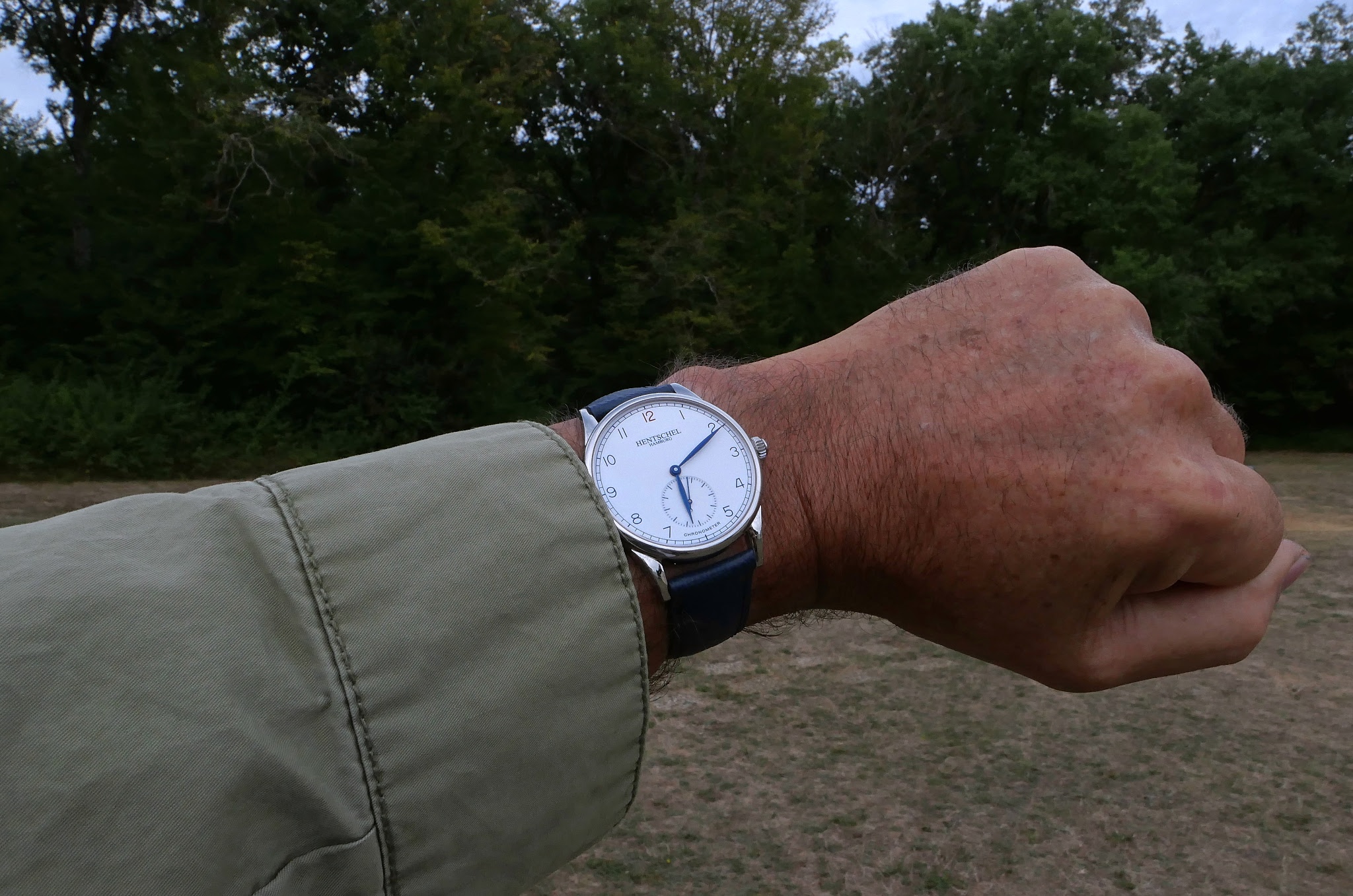 The Navy Blue strap compliments the watch at a point that I still don't have a better combination in my mind.
A Navy Blue strap which matches with another great detail: The box, which is a pouch, here. Ideal to carry and protect your watch without taking too much place. Well done, Hentschel. 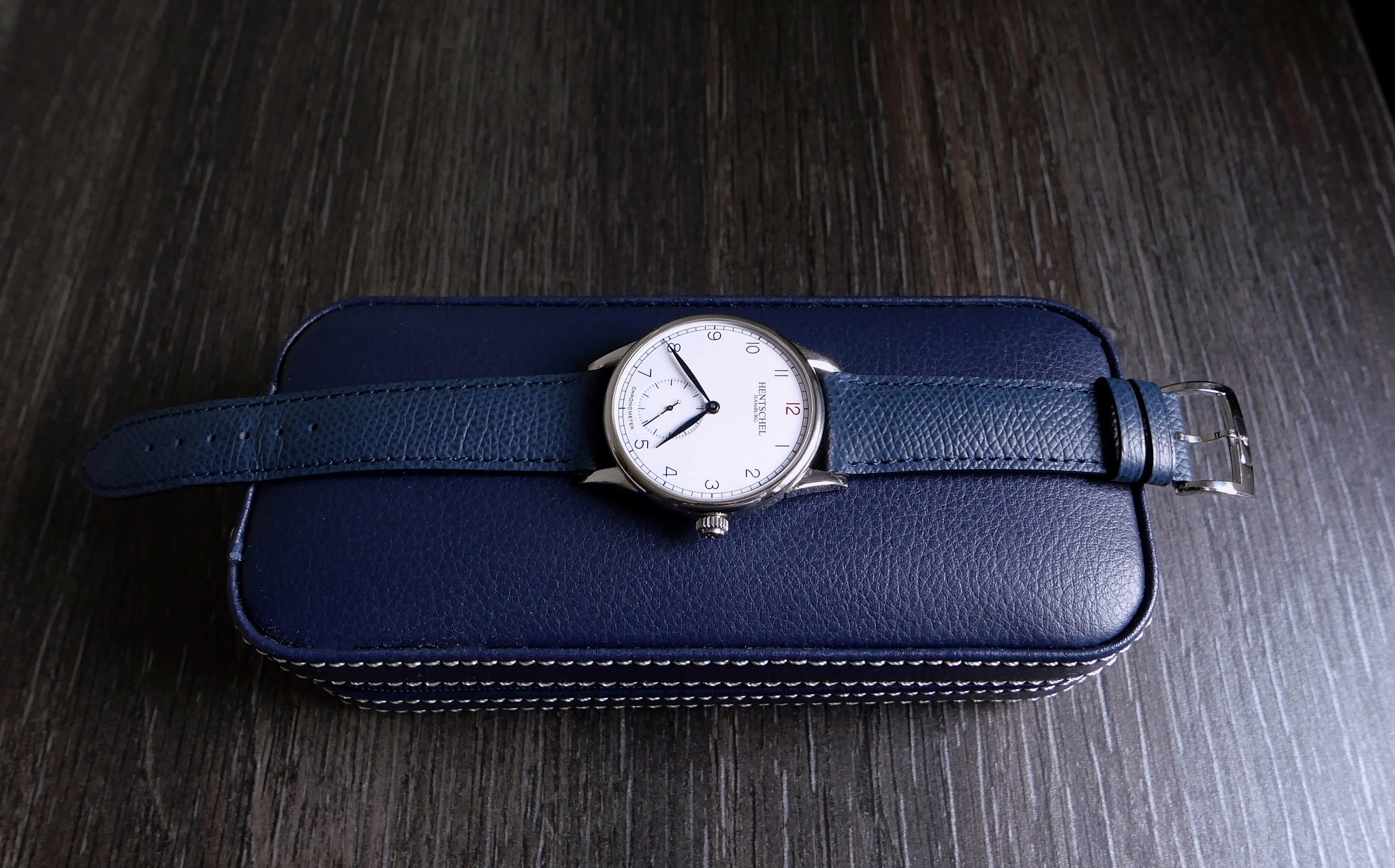 I wouldn't want to end this review without saying that being part of such a great collectors group is the final cherry on the cake.
Yes, I am happy, and proud! 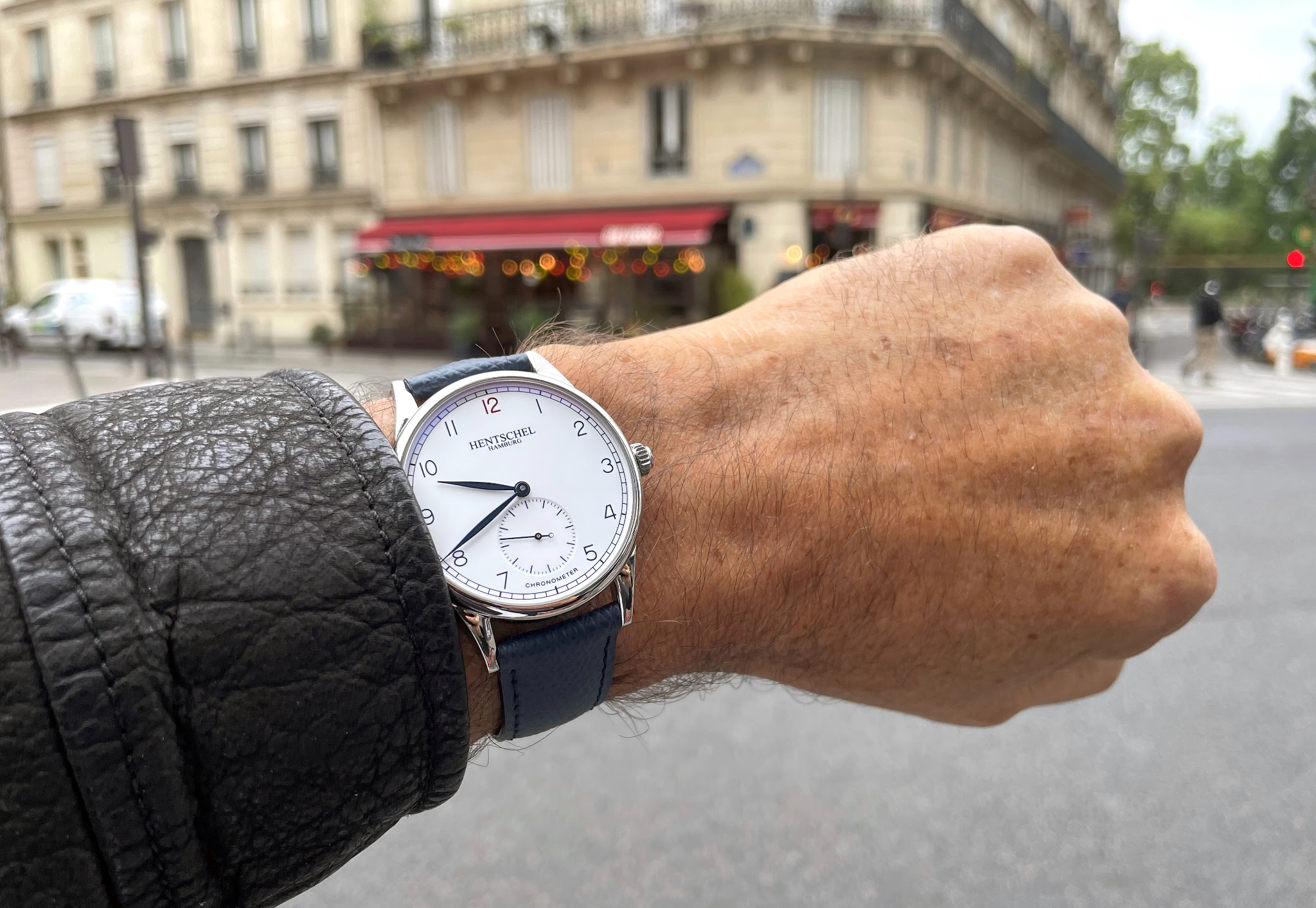 George Gently November 20th, 2022-10:49
What a nice review to read, mon ami You feel the love for it in every sentence. Great looking honest watch. Reminds me of the A. Lange & Söhne 1815 and you know what? I think I’d prefer the Hentschel P20. George
login to reply

ZSHSZ November 20th, 2022-11:15
Fantastic review. It must be a good feeling to be part of such project, being involved in the design and seeing it become alive! You guys did a great job on this one, incorporated all the desired elements of a great timepiece. As a personal opinion, I agree with you on the 37mm size due to the thin bezel and open clean dial. Nevertheless a fantastic commemorative piece... Wish you ...
login to reply

KCLQMULKU November 20th, 2022-11:59
Wonderful review! The Hentschel version selected is definitely the purist for a purist to own. I almost forget how amazing the back is, with that sumptuous movement! I certainly would have preferred the 37 given the size of the dial (and would have been very tailored to th...
login to reply

amanico November 20th, 2022-13:22
Thanks for your kind comments, my dear friend. we'll have other WPS watches, thats for sure.
login to reply

Champthekid November 20th, 2022-13:51
Thank you for an excellent review. The watch is fantastic and thanks again to you and Mike! I'm thrilled to be one of the owners.
login to reply

Hey guys, as I mentioned in my earlier threads, I liked this new release a LOT. I had a long-term appreciation for the crazy 1960 Deepsea Special, and the 2012 Deepsea Challenge, and used to think their coolness is just off the charts!! When Rolex announced this model a few weeks ago with a vintage-inspired super-duper-matte dial, domed crystal and no date, I knew I was in trouble! Well, I’m happy to say that it finally came home with me. 😃 My first Rolex diver after >12 years of collecting Rolex! 🤗 I’m ... .
Go to top.