What is in a number?

Not A, but THE wristwatch. The Beyer Museum holds as one of their treasures a timepiece that I regard as the nearest thing possible to the perfect watch. The simplest of dials: nothing but the time in hours, minutes, and seconds. The number: 866500: the movement number printed on the dial. It can only be Patek. One of the most sublime creations by Patek where the dial hides one of the most stunning Observatory competition winning movements created. There is no ‘Observatoire Bulletin’ on the dial to give it away. It is the definition of a ‘wolf in sheep’s clothing’. It is as if someone managed to cram a Formula One engine in a VW Golf and then they get away with burning off any other car on the road!

In the mid 1950’s, Andre Bornand was the Professor of Escapement Design at Geneva and also working with Patek Phillipe. The 3834T was the end of a series of movements that won the Observatory Competition in 1958 for its class. The movements were then cased later on and apparently sold in 1989 for $440 (I cry a lot these days). In detail, the 34T is a rectangular, 50 second tourbillon, Guillaume balance, duofix shock-absorbers, freesprung Breguet overcoil, straight line lever escapement, 21,600 vph, 57 hour reserve. The off-centre second hand is mounted on extra wheel off last arbor of the train, at 8 o'clock.

If you look at the case from the side, and when taken apart, the movement really was ‘cased’ and then put on sale! The case back has been machined exactly to house the movement, and once the movement is placed in the watch back, it is simply fitted into the front casing of the watch. The case really is that simple.

A side view will illustrate a little better:

The movement is sublime. All attention is drawn to the over-sized balance wheel and escapement design. I am sure that was how it was intended to be.

The Guilliame balance can just be seen along with the individual screws that would have been loosened or tightened depending on the ‘fine tuning’ required.

The finishing on the movement is stunning and if truth be told, I was sorry to see that so much of it was hidden using plates. Note the polish and the anglage of the corners on the plates, the sheen of the Geneva stripes, and even down to the polished screws on the balance wheel. Cased in a time when there were almost no exhibition backs to watches. But just knowing that the watch on your wrist housed such a movement – what a buzz! If only it was mine...

NJ March 2nd, 2009-09:27
Whispered Legend. No Poincon de Geneve,, no declaration of adjustments. Nothing but the essential exquisite quality. This is the pre "advertising campaign" Patek which created the whispered legend.
login to reply

KCLQMULKU March 2nd, 2009-09:32
What a great review of a very understated watch.  No message body
login to reply

johnngym March 2nd, 2009-10:47
surprised! thank you soooo much to share the pics of the great timepiece. these pics are very important that i did not think i couuld see in lifetime. thanks again. john
login to reply 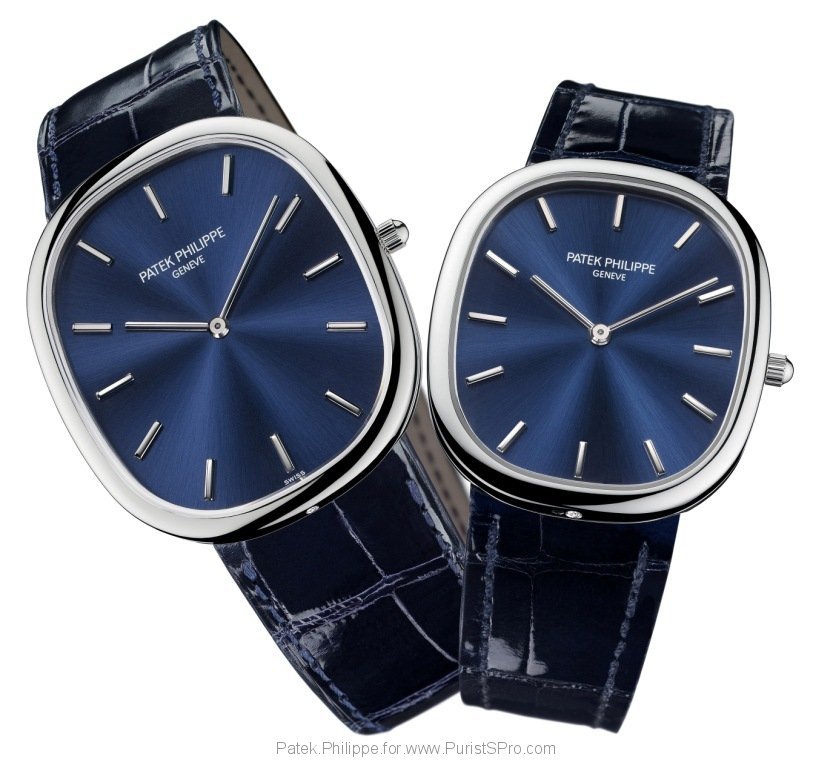 1968 was the year to break the rules ! Patek Philippe choose 1968 to break the square and the circle to melt them in a new shape, the Golden Ellipse! The 40th anniversary platinum Golden Ellipse Toi et Moi You may wonder why a platinum watch is still called « Golden Ellipse"? Golden refers to the Golden proportion, divina proportio , defined by the Greek mathematician Hippasos, around 450 before JC. A remarkable case form Since 1968 Patek Philippe produced many different versions with this case form. Only one common aspect, the ellipsoidal case In fact these numerous watches shared only one aspect, the ellipsoidal case form. The Breguet Ellipse Quite obviously some versions seen from today may seem a bit dated, at least for some ! The magical blue ....
Go to top.