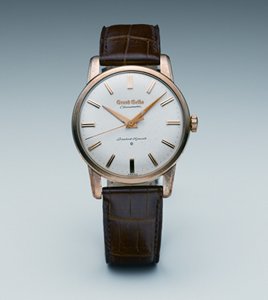 News of the worldwide launch of Grand Seiko first surfaced at Baselworld 2010. Seiko has just announced that the watches will be launched worldwide later this month, as well as the launch of a brand new English language website dedicated to Grand Seiko at http://www.grand-seiko.com.

New to the international market, but with half a century of successful history in Japan, Grand Seiko is to be launched worldwide in October, 2010.

At Baselworld, 2010, SEIKO WATCH CORPORATION announced its intention to make Grand Seiko available to the world market. The preparations are now complete and Grand Seiko will be released in October in about 20 markets in Europe, N. America, Asia, the Middle East and Oceania.

Since its launch exactly 50 years ago, Grand Seiko has been the very best of SEIKO. Inspiring its birth was a very simple and beautifully pure idea; Grand Seiko was to be more accurate, more durable, more legible and easier to wear than any other watch in the world. Today, Grand Seiko is a luxury brand that offers timepieces made by master craftsmen in SEIKO’s two exclusive watchmaking studios, using exclusive movements and the highest grade materials. Each Grand Seiko watch is instantly recognisable because of its simplicity of form and its understated elegance. From the very first Grand Seiko watch in 1960 to the latest collection of today, every Grand Seiko has shared the functional beauty and design purity that has always been its hallmark. Grand Seiko is, simply, the very best of SEIKO.

Never has a new luxury brand been launched to the world market with such a powerful array of technologies.

While Grand Seiko is already widely renowned in Japan and also well known to many collectors and watch enthusiasts in many other markets, it will be entirely new to most people who are considering a purchase of a luxury watch. To open the universe of Grand Seiko to the world, a new English-language website has been created which gives extensive details of the brand’s history, its calibers, its collection and its availability. grand-seiko.com is the new home of the brand.

aboen October 4th, 2010-10:01
The moment I've been waiting for ... Great news indeed ! Can't wait to purchase a Spring Drrive GMT from a US AD
login to reply

CaliforniaJed October 4th, 2010-12:34
Thanks SJX. Has there been any information yet as to the points of sale in the US? Best, CaliforniaJed
login to reply

donizetti October 4th, 2010-12:55
nice !!! and they have a German AD! Very good news, except for the wallet of course, Andreas
login to reply

RJW October 4th, 2010-16:01
Good news. I've been struggling with the... official Japanese website because I can't read Japanese so the English version is timely. My only concern, will there be enough stock initially for the worldwide expansion? Regards, Richard.
login to reply

SJX October 4th, 2010-19:09
I am sure there will be sufficient stock. I have seen Seiko's production and it impressive - both in terms of capability, quality and size. - SJX
login to reply

KIH October 4th, 2010-16:28
This is a great news! Thanks for the report, SJX! But still, if anyone has trouble finding some model or such - do not hesitate to drop me a line. I will try to find out in Tokyo. My office is 5 min walk from Seiko service center who took care of three of my GSs before, wonder...
login to reply

bernard cheong October 5th, 2010-18:52
I am recomending a "BUY" for all GS, especially manual wind and spring drives. BOTH. I am still unable to get off the floor after collapsing from the sheer quality of balance between quality and handwork plus hand finish, and how they kept the price good by using only handwork where it MUST matter. I am personally going to start a collect...
login to reply
0-10-10

Dear PuristS, A number of you have expressed great interest to know what we have planned for PuristS 10th Anniversary. While we can't give exact details yet, we can tell you that there will be exciting special models and series to celebrate our 10th anniversary as a community. There will be at least 3 special models from independents long cherished and respected by PuristS. There will be special series from brands long supportive and friends of PuristS.
Go to top.